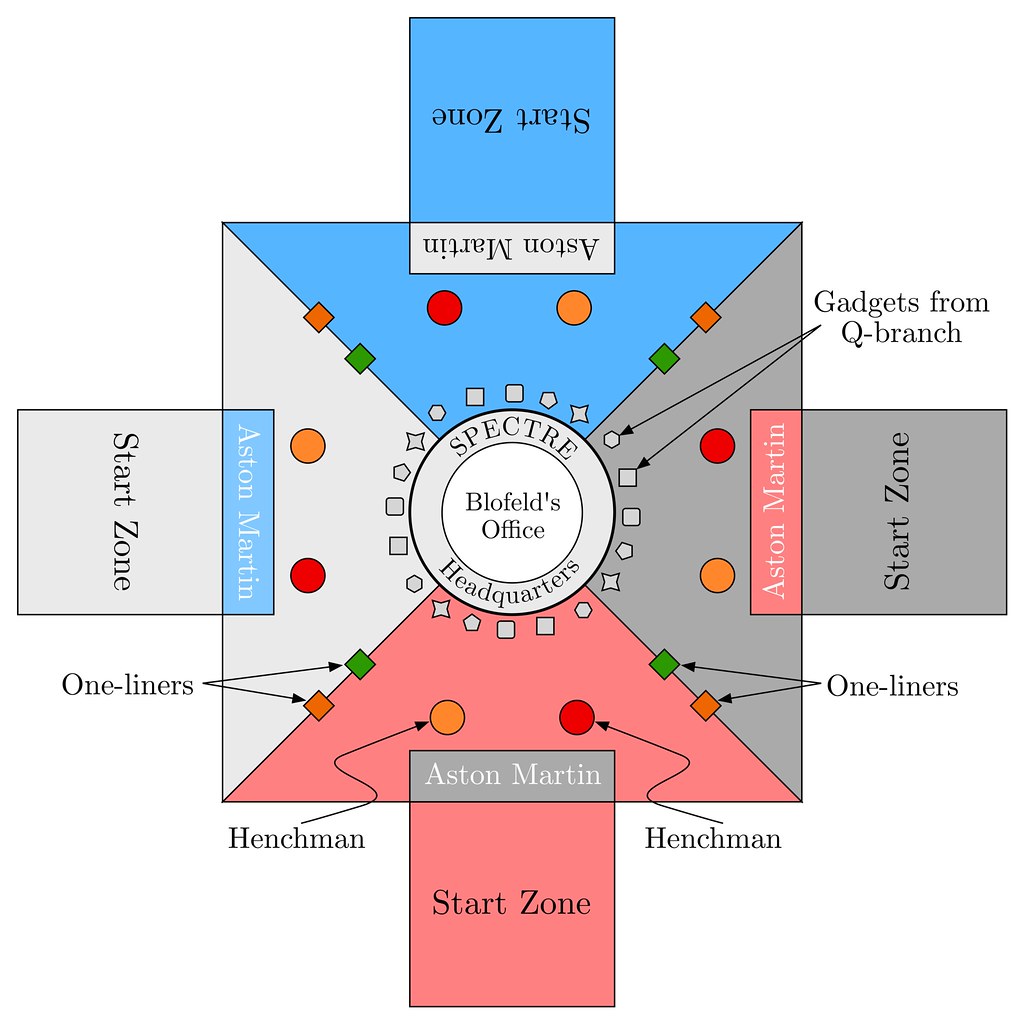 James Bond and MI6 have long protected the world from supervillain Ernst Blofeld and his organization, Special Executive for Counter-intelligence, Terrorism, Revenge and Extortion, better known as SPECTRE. This fall, SPECTRE is once again threatening to take over. Luckily, teams of MCHE 201 students are available to help Bond on his mission.

On November 24, beginning at 4:30pm, the 0070503 contest will be held in the Oliver Hall Main Lobby. There will be two events. Prior to the two events, Dr. Vaughan will give a short presentation introducing the contest.


From 5 — 6pm, a panel of judges will perform a design review of each machine. The teams must describe their machines quickly and clearly to the judges that visit, who will evaluate each team on aesthetics, ingenuity, and presentation.


Following the design review, the student robots will compete in a head-to-head competition on the representation of 007's world shown in Figure 1. The robots have thirty seconds to Defeat Henchmen, Retrieve gadgets from Q-branch, Plant bugs in SPECTRE’s Headquarters, and Collect one-liners.

The student robots will aid in each of the main objectives of the 0070503 mission. The details of each of these contributions is listed below.

Defeat Henchmen: Bond’s henchmen are always waiting to foil his plan to save the world. In each zone, there are two henchmen (plastic bowling pins) that must be defeated by removing them from the zone. For each henchman that is not completely defeated by removing it from the zone, the team will be penalized -10 points. If the henchmen is only partially removed, the team will be penalized -5 points.

Collect One Liners: Bond wouldn’t be the same without his one-liners. However, they’re hard to come up with on the spot. So, there are available one-liners (toy blocks) that must be collected into the team’s zone for Bond’s future use. Each one-liner completely collected into a team’s zone will earn 10 points. One-liners that are only partially in a zone earn no points.

SparkFun Electronics was kind enough to give a substantial discount on the robot kits used in this class. We are grateful for their support.

For more information, see the full set of competition rules.